” When it comes to trend prediction and forecasting noone does it so accurately than the renowned trend forecaster and futurist Lidewij Edelkoort. In this article she articulates her predictions in a very intriguing and captivating manner that hinges on the creative brain cells of any designer” Sylvia De Mode 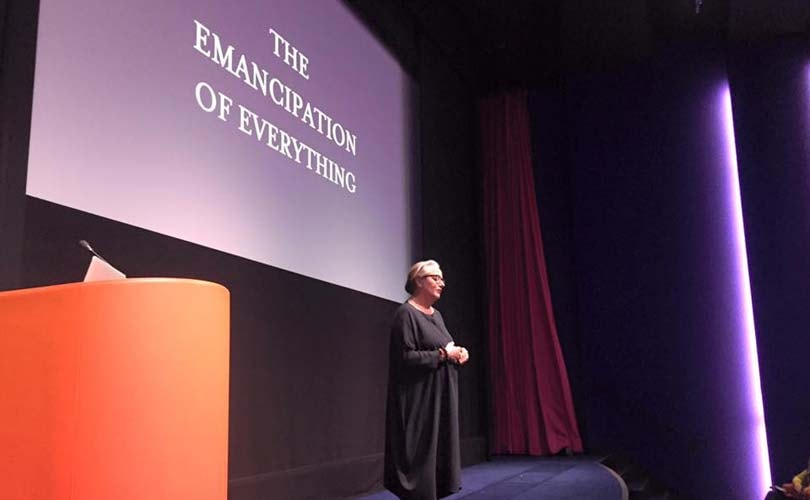 ‘The death of fashion lead to appetite for something new’: The Emancipation of Everything

“Following the death of fashion is the emancipation of everything – not just in fashion, but in all disciplines of life as we free ourselves from the past and finally move into the 21st century, and begin to ask ourselves why we do things the way we do,” said renowned trend forecaster and futurist Lidewij Edelkoort during her opening speech of her much awaited follow up to her ‘Anti-Fashion’ manifesto, which spurred endless debate over the past few months 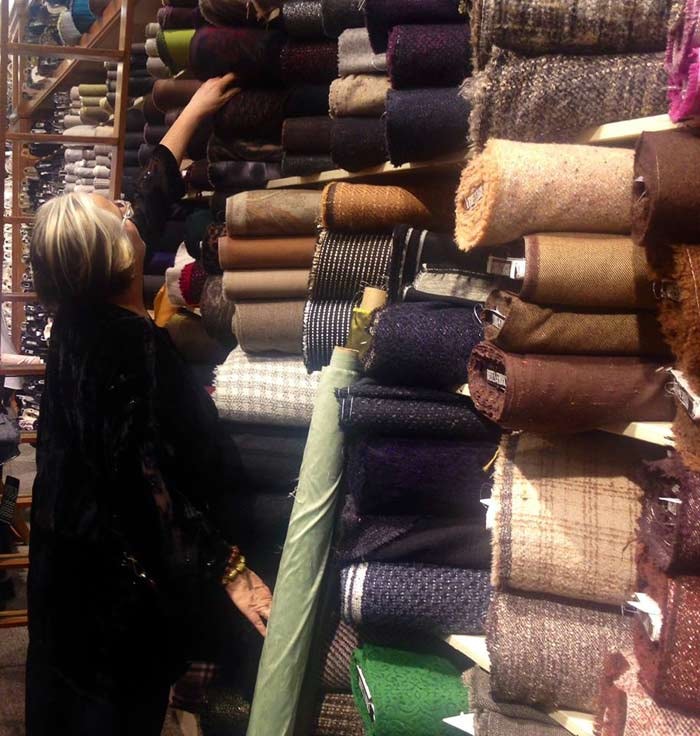 Named “The Emancipation of Everything,” Edelkoort proclaims the coming of a second movement, not only within the fashion industry, but also within society itself as drastic changes begin to take place across the globe. “My reading of this presentation has changed since the Paris terrorist attacks,” explained the newly appointed Dean of Hybrid Design Studies at Parsons School of Design. “These events have put my presentation in a new, different light and shows how fashion is influenced by the world’s events.” 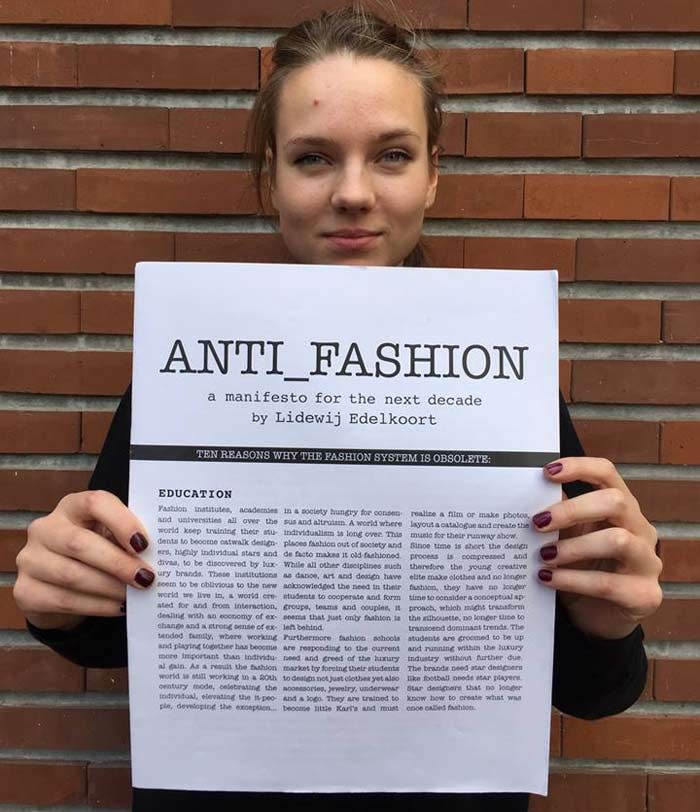 “Designers want another move in the fashion system

Edelkoort admits that is was not easy to come up with a follow up to her manifesto from before, which she still stands firmly behind. “After presenting it, I received so many comments and compliments from people around the world who said they felt the same. Creative directors and designers are being squeezed out like lemons in the fashion system,” she adds, highlighting Raf Simons recent departure from Dior and Alber Elbaz exit from Lanvin as two examples of the broken fashion system, as well as John Galliano’s nervous breakdown whilst working at Dior. “He was so busy when he was at Dior, he didn’t even have time to light his own cigarette – his assistant did it for him.”

“Especially those in the luxury end of the industry suffer, as they are under tremendous pressure to create as there is not enough talent in the industry to carry out such a job – creating 18 collections a year, plus accessories and perfumes. It’s very extreme and only a few like Karl Lagerfeld and Tom Ford enjoy it working under such pressure and can handle it. The rest burn out. Designers want another move in the fashion system, but marketing does not want that – they are stuck in the last century chasing the next ‘it’ item…The time for derailing in the industry is coming.” 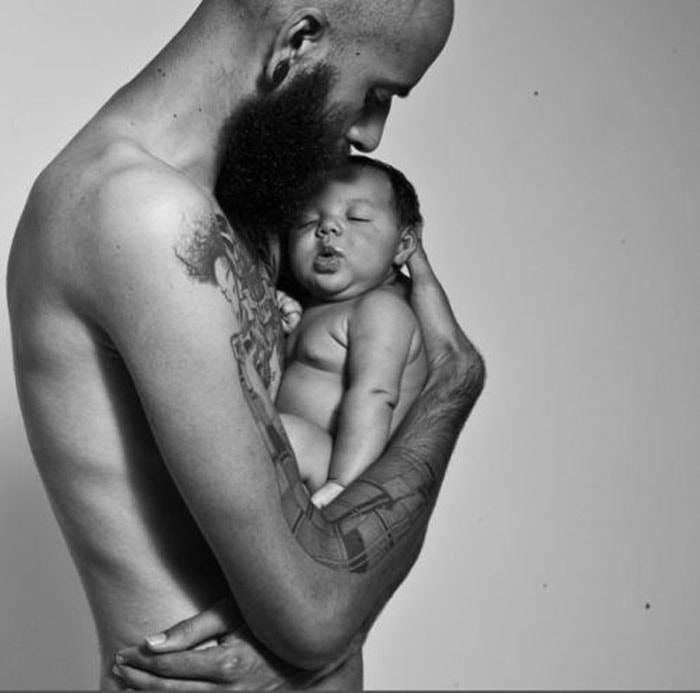 The Feminisation of Men, the Rise of the Matriarchal Society and Ageless Generation

“The death of fashion lead to appetite for something new, rather than just survival – at a certain point you have seen it all.” So what will this emancipation, this second movement mean for the fashion industry? One of the biggest changes Edelkoort foresees is the feminisation of man. “For the first time in history, men are fathering and looking after their own children.” This more sensitive notion of fathering is reflected within the industry, with the menswear market expected to grow 65 percent over the next few years and the womenswear market share set to shrink. “This shift has lead to men of today moving away from their fixed ‘man’ codes, no war and ready for the new world” added the trend forecaster, which means that men are becoming more soft and sensitive. “I am very excited for the merging of gender.” The loss of former ideal of ‘monster’ is translated into a new era for menswear, with more colours, lace, bijou’s, and floral, but still masculine at the same time. 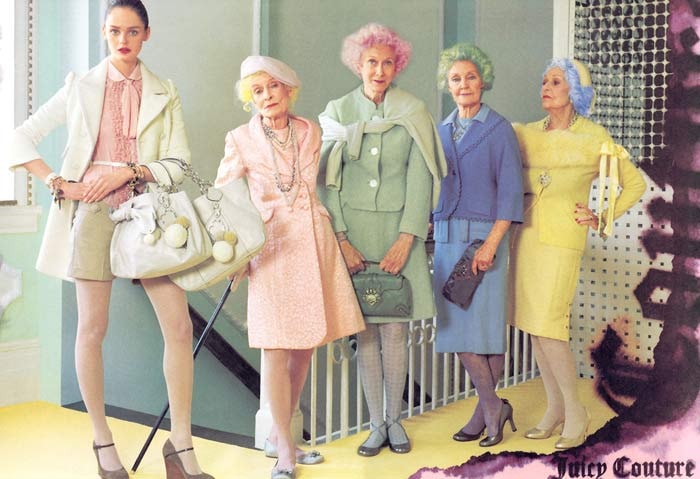 So what happens to the women then, if men are becoming more feminine? “She is man and woman, she needs to compensate for the newfound femininity in man.” The rise of the matriarchal society “is on the horizon” according to Edelkoort, and “needs to happen soon, otherwise we’ll end up with Donald trump as President in the US,” she quipped. This movement will lead to the arrival of new patterns and prints, which can be seen as both feminine and masculine. Women will no longer dress for men, but dress from themselves, favouring “soft, rounded but strong” forms. This shift is also linked to the return of the ‘granny panties’ – “Don’t ask me why, but it’s coming.”

Speaking of grannies, another monumental shift Edelkoort predicts is the ‘Ageless Generation,’ the inevitable decline of boundaries between generations leading to a reversal of dress codes. Bridging the gap between old and young, this movement will see young and old consumers sharing the same clothes and designs without a qualm. Think ‘granny-chic’, similar to Alessandro Michele’s new direction for Gucci, but then with more pattern, jacquards and interchangeable looks. “The pussy-bow blouse will finally make its return and mesh with the high waisted pants as low waisted pants will be forgotten for good.” Although Edelkoort is unsure how long this trend will last, the industry inclusion of older women can only be indication of the new to come. 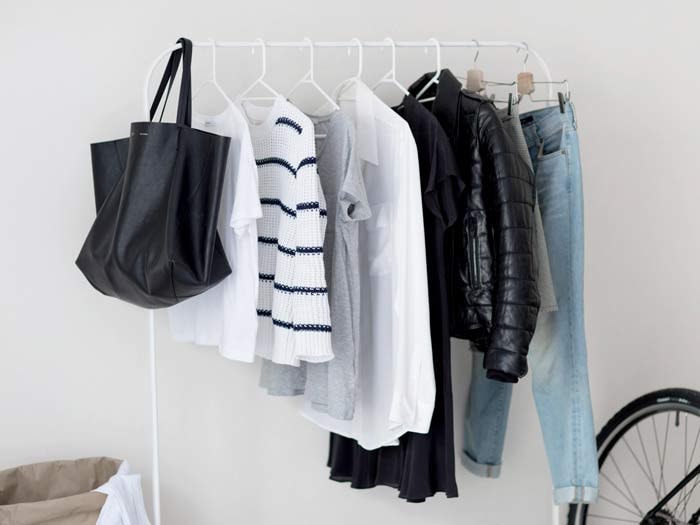 Return to the Basics and Couture, the Urbanisation of Rural and Rise of the Workwear

A common link within the emancipation of everything is simplicity and modesty. Edelkoort believes that consumers will yearn for a strong collection of basics, a capsule collection of simple clothes, which are high-quality, sustainable and beautiful. “People will stop buying for the sake of buying and live through more ethical principles.” The focus will be on small, capsule wardrobes with limited options such as trouser, shirts and dresses, in a neutral palette of colours. “It will be seen as very luxe to be able to function/live with so little.” In order to elevate the appeal of the basics, they will contain fancy detailing and accents such a piping, tie silk fabrics and embroidery. 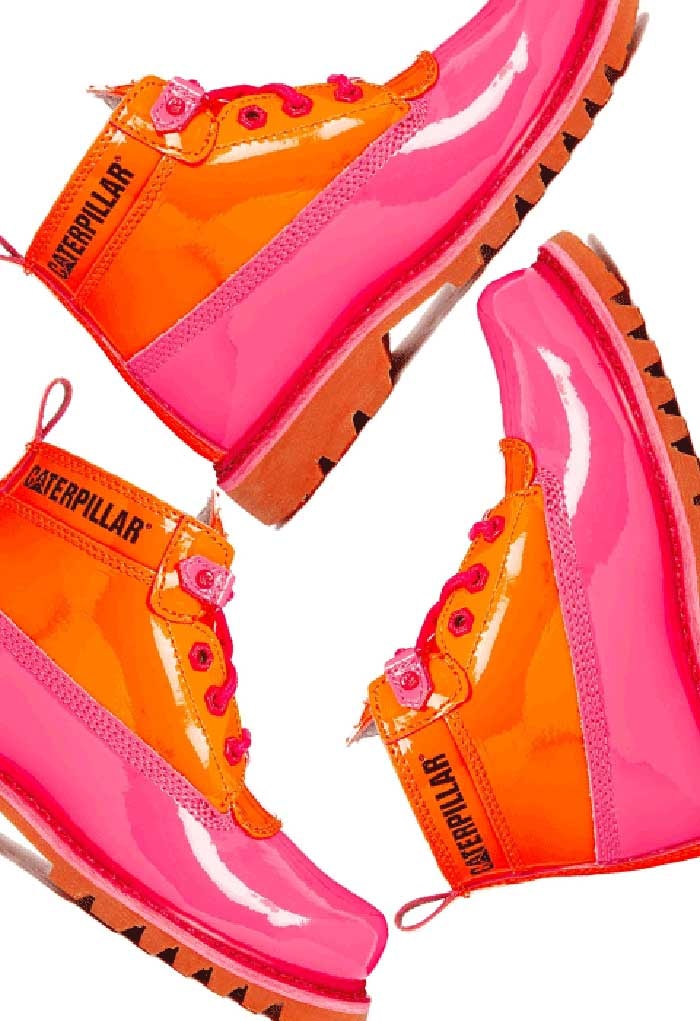 “Every article of clothing is to be seen as a work of art,” added the futurist, who sees a return in importance as to how clothes are made. “Which leads us to making our own clothes or having them custom made.” She predicts a future of open source platforms existing online where people can download dress pattern makers and make their own Dior gown. With more consumers moving to cities yet yearning for the rural lifestyle, Edelkoort also foresee the urbanisation of rural. This movement, seen in the rise of slow-cooking will translate into fashion and designs, as people invest in better quality clothes, made in a sustainable and fair way. “Think farmer or pioneer styled garment, such as a long pleated skirt with a blue blouse and oxfords. It is so beautiful on one hand, but also so common it’s almost banal.”

One unexpected trend to emerge is the rise of workwear. “It’s still quite early to be looking into the rise of worker, but it will become an important trend.” So important in fact, that Edelkoort has dedicated her next book to workwear. “But where does this interest in workwear come from?” she asked. Linking it to the rise of young entrepreneurs looking into production and buying factories, and coming into direct contact with workers has lead to a revival for manual labourers, believes the trend forecaster. This will be reflected in their workwear, which will pay much more attention to detail, include colour blocking as well as new technologically enhanced materials. 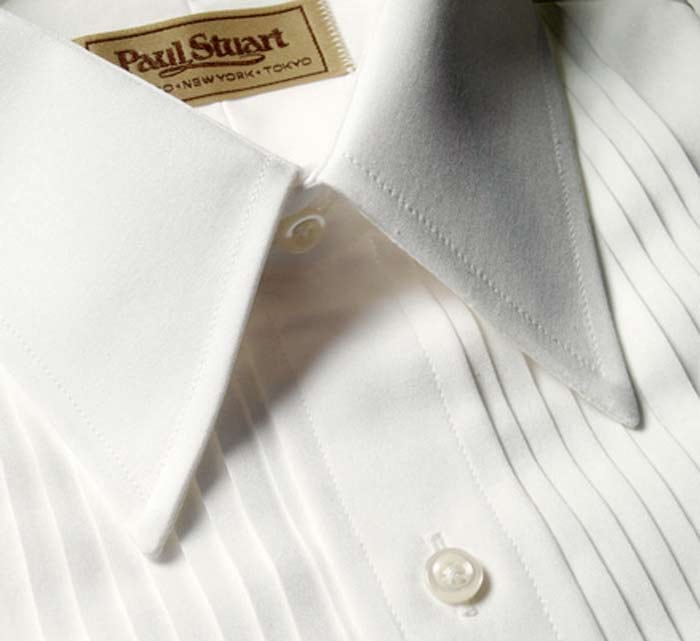 The revival of White, the reversal of Brown and retreat of Black

The emancipation of colour is also a key part of the second movement and Edelkoort believes that colour white will take on a new form and come to reflect a more peaceful and serenity time. “White will become representative of unification and unity in society, although not necessarily religious as god will not be present and people will have self reason to come together and pray.” She predicts the dress shirt, in thick fabrics such as poplin and oxford, will become a very important garment in white, noting that she felt compelled to include fabrics in her predictions to fully explain the shift in colour understanding within the second movement.

“After being banned from the industry for 25 odd years, brown is back wanting attention,” stated Edelkoort, who is pleased with the colour return, complaining that for a long time she was unable to even find a pair of brown shoes or bag. “It will become the new winter colour for the next 10-15 years, together with midnight hues and tones.” She added that brown will gradually return within the fashion industry’s colour scope after being shunned in a “racist manner.” It will be made beautiful again through small geometric patterns, business prints such as pinstripes as well as african and tribal patterns. “The combination of white shirt and brown pants will be suddenly seen as very new, even if it’s not.” 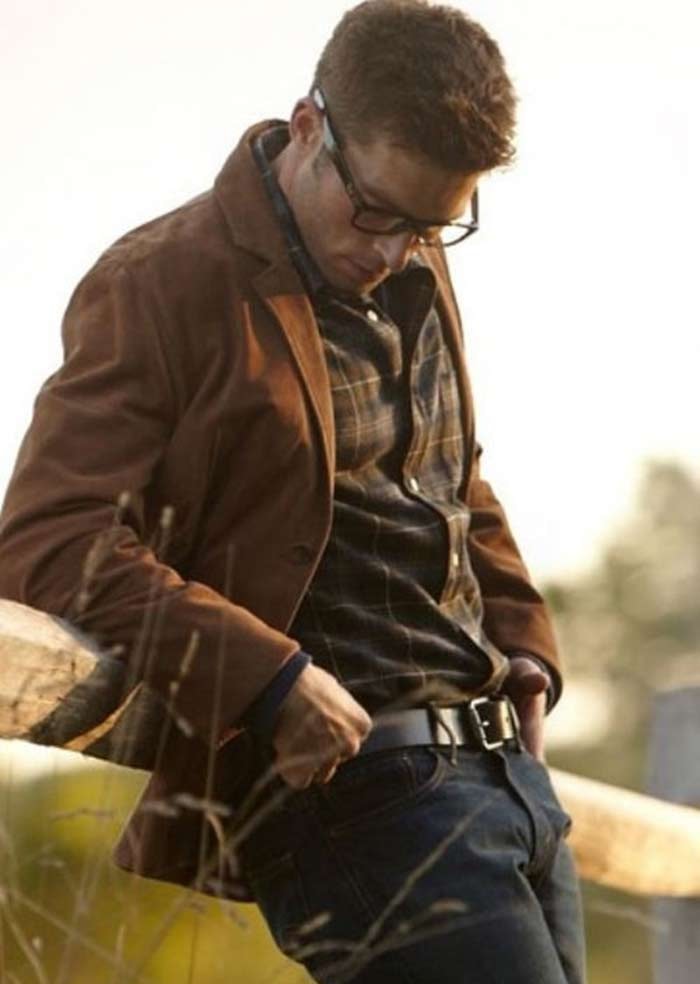 Finally, she predicts the retreat of her favourite colour: Black. “How dare I say it, I always wear black and I am sorry to say it but it’s going to happen.” The trend forecaster was dressed in her usual uniform of a black dress when giving her presentation, which highlighted her fondness of the colour. But the retreat could be good for business she noted. “Think of all the black clothing they have to replace.” Where does this retreat stem from? “I believe that IS will become one of the main reasons why we can’t wear black and the natural system is to adapt colour in defence to negativity. IS took over our own subculture urban dance with their uniform and I fear the retreat of black will be a repercussion.” She does not expect to see the retreat of black to happen over night, but predicts the colour will be limited to evening and formal wear once more, leading to the emancipation of the previous fixed notions of the colour black.

“Emancipation is thinking how we can reverse these fixed notions and roles in society – it is a moment to look at how society is functioning and changing in silent revolutions,” she concluded. “It is time, after 15 years of trying to adapt in this century, to renew after seeing the light. It is time that the century reflects our age and not the old age we came from. So enjoy and emancipate.”